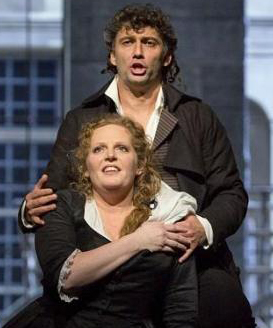 We will be watching UMBERTO GIODANO’S  Masterpiece “ANDREA CHENIER” ON SUNDAY, February 23, 2020 starting at 1:00 pm. There is no need to register for this free event.

THE STORY: The poet Andrea Chénier attends a party at the Countess di Coigny’s mansion. He expresses outrage at the corruption in King Louis XVI’s government and the poverty of many Frenchmen. This moves the Countess’s daughter Maddalena, and inspires the footman and revolutionary-in-the-making Carlo Gérard to quit his servitude. Soon after, the French Revolution begins. Five years on, Louis XVI has been executed, the Jacobin party are in power, and their leader Robespierre has imposed ‘The Terror’. Gérard has become a leading Jacobin, but Chénier has fallen out of favour with the authorities and is in danger. He delays his flight from Paris to meet a mysterious woman who has written to him. She reveals herself to be Maddalena, and the pair quickly realize they are in love. However, Gérard also desires Maddalena. When Chénier is arrested by the authorities, Gérard realizes that he has the power to destroy the man who once inspired him. As his conscience is tested, so too is the love of Andrea and Maddalena. The production is from the Royal Opera House, Covent Garden, London and is designed and directed by David McVicar.