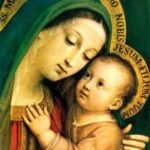 In continuation of our series on getting to know Our Blessed Mother under her various titles.

“What more can I do than give my life for you:’ These words of Christ are especially applicable to His Mother Mary, for while it is true that He died for the redemption of all men, it was through the anticipated merits of His holy passion and death that His Mother, Mary, was conceived without sin. And it was through her Immaculate Conception that she was thus made worthy of the sublime dignity to which she was called.

The relationship between Christ and Mary, as Son and Mother, exists now, though both are in the Kingdom of Heaven, as well as it did while they lived on earth.

In the world Christ obeyed and loved her, and He still gives her this same obedience and love in Heaven. His child-like affection for her never wanes. His respect for her is that of a devoted Son, while His love for her is greater than for all the blessed in Heaven.

Knowing this, we should be filled with confidence when we appeal to the Mother of Christ, our life, our sweetness and our hope. She will pray and intercede for us, at the throne of her Divine Son, for Christ will not turn a deaf ear to the pleas of His Mother, the ever-spotless Blessed Virgin Mary.

VACATION BIBLE SCHOOL 2022!“Thank you to everyone for your love and support!” JoEllynRegister by tomorrow, June 30.Volunteers still needed. JOIN US! ... See MoreSee Less
View on Facebook
· Share

Catholic Night at the PadresOMC has a block of tickets! Friday, July 15D-BACKS VS PADRES | 6:40 pmTickets $35All tickets purchased through this offer include a Catholic Night Hat! Directions on how to pick up your hat will be included with your ticket(s)Drop off your cash or check to the Parish Office - Checks payable to OMC. Credit card information omcsandiego.org/catholic-night/Tickets available until we sell out. Purchase your ticket(s) TODAY! ... See MoreSee Less
View on Facebook
· Share

FAMILY NIGHTFriday, June 246 pmWe are restarting the Family Night Ministry - each month will be a different theme and activity.THIS MONTH - Game Night with a burger & hotdog barbecue for dinner. RSVPs for this are appreciated @alwaysmom22 but not required.Help spread the word and JOIN US! ... See MoreSee Less
View on Facebook
· Share

ALL ARE INVITED!Wednesday Nights 6pmThe Chosen - in the Parish HallWhile staying faithful to the Gospel, The Chosen tells the story that is “in-between the lines” of Scripture, bringing to life those people who are mentioned in the Bible and using historical context of life at the time of Jesus.Dinner served at 6pmThe Chosen begins at 6:30pmDiscussion questions in small groups follow.Come by yourself or invite a friend! ... See MoreSee Less
View on Facebook
· Share

When this happens, it's usually because the owner only shared it with a small group of people, changed who can see it or it's been deleted.
View on Facebook
· Share

THIS SATURDAY, May 21! 8 am to 12:30 pmSpeaker: Fr. Steven LarionWe invite you to learn more about Our Blessed Mother Mary and ways to strengthen your Faith by Consecration to Jesus through her. We will begin the morning in the Church with Celebration of Mass at 8 am followed by presentations in the Parish Hall....#ourmotherofconfidence #omcyoungadults #catholic ... See MoreSee Less
View on Facebook
· Share

5/3/22 Eucharistic Adoration & Dinner. It was a blessing to spend time with Jesus together and with new and familiar faces! Holy Hour is every Tuesday 7-8 PM / Holy Hour & Dinner is every 1st Tuesday of the month. ... See MoreSee Less
View on Facebook
· Share

Congratulations to those receiving their sacrament of Confirmation Saturday, April 30th!Please keep our candidates, sponsors, and their families in your prayers. Come Holy Spirit!Confirmation will be at St. Catherine Laboure. ... See MoreSee Less
View on Facebook
· Share