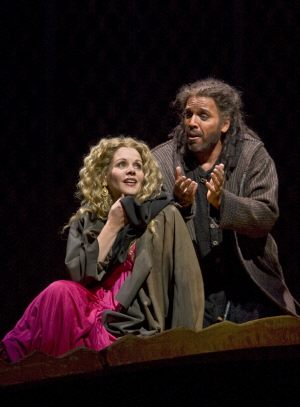 When the most voluptuous, sought-after courtesan in the world meets an ascetic monk whose life is devoted to God, you know erotic sparks are going to fly. And when the clash takes place in a glorious, but rarely performed, opera by Massenet, it’s a delight to the ear just as much as to the eye. Renée Fleming is every inch the glamorous Thais, swathed in elegant gowns designed by Christian Lacroix. Thomas Hampson is the tortured man of God. This production by John Cox, which premiered in December 2008, brilliantly sets the stage for a confrontation as old as civilization itself.
Full Synopsis