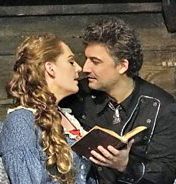 The first of two Puccini creations to have its world premiere at the Metropolitan Opera, La Fanciulla del West is a sweeping romance set during the California Gold Rush. In this transmission from the Met’s 2018–19 Live in HD season, soprano Eva-Maria Westbroek gives a fearless performance as Minnie, the opera’s gun-toting heroine, who runs a saloon for a camp of rambunctious miners. Opposite Westbroek, tenor Jonas Kaufmann returned to the Met stage for the first time in nearly five years to sing Dick Johnson, the mysterious outlaw who wins Minnie’s heart despite his unsavory past. Baritone Željko Lučić rounds out the principal trio as the vindictive sheriff Jack Rance, and Marco Armiliato conducts a vividly cinematic staging by Giancarlo del Monaco.